Perils of the Peryton: A Lesson in Action Economy

If I have to pick a single rule book as my favorite from the Dungeons & Dragons library, I always go with the Monster Manual.  I'm quite partial to the art within, especially those vintage David Sutherland and D.A. Trampier drawings from the original AD&D edition,  not to mention the vast menagerie of potential foes for PCs.  I have to admit that many of my favorites are criminally underused, with only a happy few DMs  daring to run those off-the-beaten-path creatures in a game session.  Now that I'm finding more opportunities to be the DM, I have returned again to these hallowed pages, mining through them for interesting encounter possibilities.  Turns out, though, that you  have to take care not to bite off more than you (or your PCs) can chew.

One challenge with creating engaging encounters in the 5th edition is the notion of action economy.  It most likely existed in my AD&D and 3rd edition days as well but it was not a concept with which I was overly familiar.  It is pretty critical to be aware of this, however, in the current system.  Simply put, action economy refers to "how many attacks, abilities, etc. a creature can do on a turn". Credit: Dungeon Solvers   ﻿5th edition seems to give an edge to the PCs as most characters on their turn may, in no particular order, take their movement (all at once or broken up over the turn), take an action (cast a spell, make an attack, have a conversation), take a bonus action, and take any reactions they are allowed.  Most of the monsters, on the other hand, are limited to movement and at least one attack.  Tougher creatures may have multi-attack capabilities or even lair and legendary actions but, still, with a larger party, the deck feels a bit stacked against the opposition.

That said, the dice giveth and the dice taketh away, showing there are no real absolutes even in Faerun or Iferra (or your own campaign setting).  I designed  an encounter recently, using a monster that I have longed to use since I first started playing back in the early 80's, that turned that earlier interpretation of action economy on its head.  The monster in this case?  The peryton.  Spawned from carrion birds said to have  fed upon the remains of a scorned murderess, these predatory half stag, half bird-of-prey monstrosities wreak havoc on travelers in the high mountain peaks. In the rules, they are listed as a challenge rating of 2 (450 xp).  Following the "XP Threshold by Character Level" in the Dungeon Master's Guide,my party of 6 5th-level characters should have found facing 4 of these opponents (1800 xp) a medium to difficult risk encounter (250xp x 6 PCs= 1500 xp). 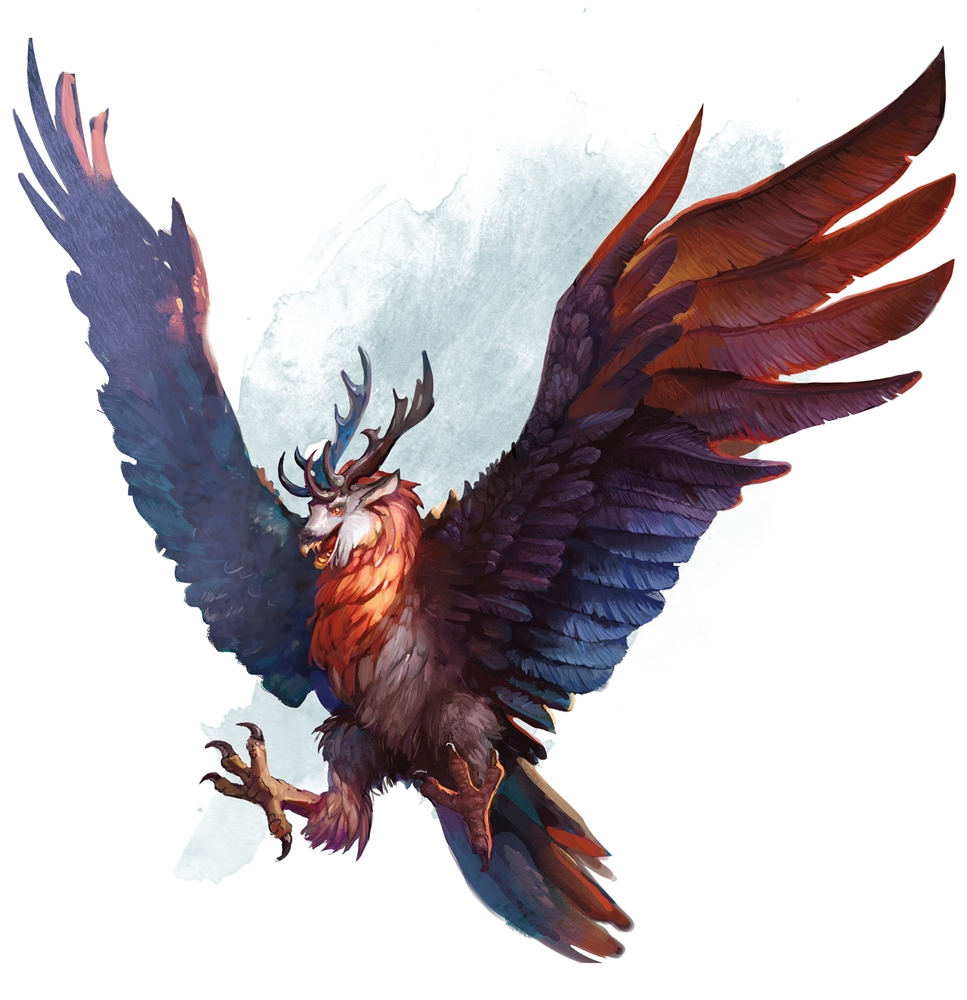 I thought this would a be pretty straight-forward, "taste of things to come" as the PCs ran into the two mated pairs on the road to the destination wherein lay the "big bad".  Things turned out quite differently.  According to the Monster Manual, the peryton has multi-attack, having one gore attack and one claw attack on each turn.  Again, with such a large party, it should have been tough but not horrifying.   As in life, you always, always read the fine print.  The manual goes on to specify 2 further aspects of the beast's combat style.  First, the dive attack.  If the peryton is flying and dives for a distance of 30' or greater, a hit with a melee attack adds a further 2d8 to the principal damage.  The rules do not specify "one" melee attack, it only specifies a melee hit.  That means that, should the peryton land both attacks off the dive, the character faces 4d8 additional damage beyond the hit damage itself.  Second, perytons have an ability called "Flyby", meaning that the creature is not subject to attacks of opportunity when it flies out of an enemy's reach.  Based on that, the monster, with a 60' flying movement, can a)dive for 30' straight at a target, b)make two attacks with a devastating bonus if they hit, and c) take the remaining  30' of flight movement to leave the melee range of the target.  If it doesn't land and the PCs don't move under any cover, the peryton can, ostensibly, do the same thing again on future combat rounds.

In actual gameplay, the party traveled up a river and headed up into the mountains to investigate the sinister goings-on at a remote logging camp, finding themselves in a deep alpine valley centered between two high ridges.  The 2 mated pairs of perytons had established a lair in the valley, hunting any animals or humanoids foolish enough to venture so high in the mountains.  As the party entered the valley, they spied the remains of a horse, likely a pack animal from the logging camp, lying  in the middle of a field.  Upon investigating the animal, they soon discovered it was a previous kill by the perytons.  The fell creatures took flight and were soon diving the party.  The first attack on one of the main fighters in the group generated 2 hits, one of them critical and both benefiting from the bonus 2d8 dive damage.  Before the poor fellow could react, the peryton was already 30' feet away, still in flight and banking for the next run.  The remainder of the encounter proceeded in similar fashion.  By setting the fight where I did, it allowed the perytons to use the location to their advantage as one would expect from a predator.  That said, the dice were also on the side of the monsters and, before long, the party was eyeing the possibility of several being unconscious.  Character death is always a possibility but no DM wants to be the "one who killed my favorite PC".  Thankfully, the party proved very resourceful and were able to dispatch the creatures, if a little worse for wear.

The lesson here is to be adaptable as a DM.  The Dungeon Master's Guide reference tables and the challenge ratings in the Monster Manual are there to give you a solid start on encounter building but they do not necessarily reflect the luck of the dice or the cleverness of your players.  It is better to use them as a tool to help you, coupled with you knowing your players and considering how the creatures would likely react in the encounter you are building.  You may design one, like this one, that is more balanced on paper than it is in practice.  Be ready in case the dice upset that balance so that you can reign in or amp up the encounter accordingly.  As always, the fun of the game is more vital than the hard-and-fast rules.  I'm still glad I tried out a favorite, underused monster but I will definitely pay closer attention to the action economy the next time around.  2 perytons might have been company but 4 were definitely a crowd.

Back to Tal's Gaming Blog